Ants as tools to understand society

Ant societies have long fascinated mankind by their resemblance to human societies and elaborate collective behaviour. Ants cultivate and farm fungus in their nests, herd aphids as cattle and wage war with each other.

In contrast to human societies, ants present an ideal study system to study how collective patterns emerge through self-organization and how societies respond to perturbations in their environment. We can easily manipulate crowding, resource availability and parasite pressure, thereby allowing us to study questions that would be impossible to answer in humans. One of the most interesting collective dynamics in a colony is the trade-off between fast transmission of food and how ants avoid the outbreak of diseases.

To better understand transmission dynamics and the underlying socio-ecological drivers, we have to analyze ant behaviour across time and space. The goal of this challenge is to generate algorithms that can: 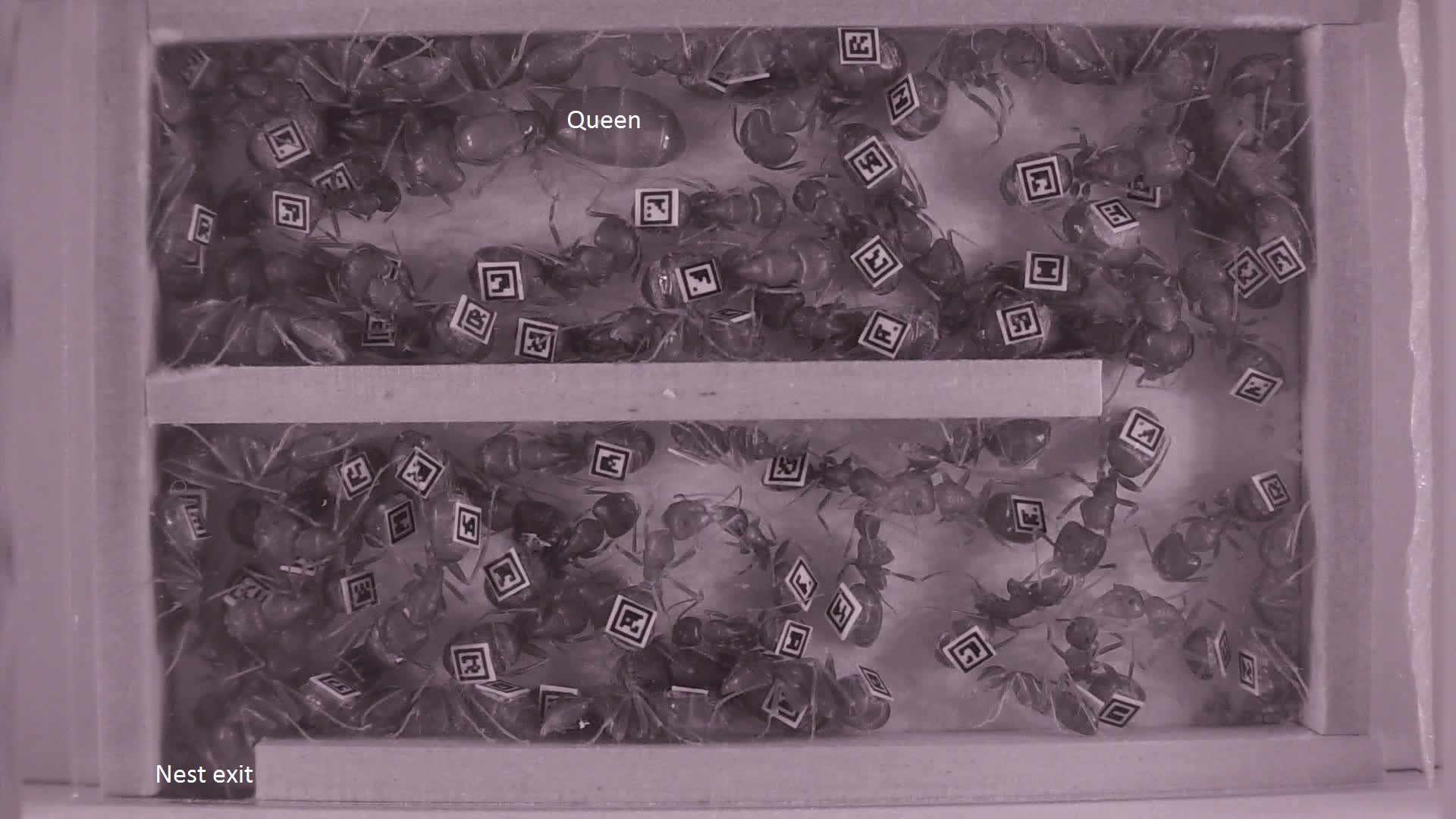 The only individual that was not marked was the queen, since her distinct appearance (larger body size) makes her very easy to identify, and moreover, we did not want to stress or injure her. Students have manually tracked several hours of ant movement inside a colony allowing us to determine the location of each worker for each second of video footage.

To ensure that the student’s tracking data is as exact and repeatable as possible, we asked the students to track the neck area of each ant (see image 2), because it is easily recognisable and relatively small leading to less variation among the students’ tracking data. In particular, each student tracked a focal ant by clicking on its neck area in each screenshot. To speed up this process, we used a customised Python code to record the x- and y-coordinates that were generated by the students’ clicking automatically. Thus we were able to obtain x and y coordinates (unit is pixels) for the location of all individuals at each second of the observation period. In instances when the ant neck was not visible, e.g., when an ant was underneath another ant, we estimated the neck position based on the last known location and the other visible body parts of this ant. If an ant left the nest, its coordinates were set to x = 0, y = 0. 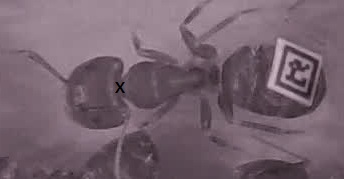 The overall error (or Loss) functions are defined as :

The goal of the challenge is to minimise this error function/loss $L_1$ (which approximates the overall accuracy), and if multiple participants have the same $L_1$ score, then they will be evaluated and ranked based on $L_2$ (which is the mean squared error).

All submissions will be evaluated on the test dataset in the docker containers referenced in the Resources section. The code archive will be uncompressed into the /ants path, and every code archive is expected to contain a main.sh script which takes path to a folder containing frame images that will be tested, as its first parameter. So to test your code submission, we will finally execute :

This is expected to output a CSV file containing the name of the file, and the associated probabilities for all the classes at the location :

The author of the most highly ranked submission will be invited to the Applied Machine Learning Days symposium at EPFL in Switzerland on January 30/31, 2017. This educational award is granted to the participant with the either the most insightful submission posts, or the best tutorial. Expenses for travel and accommodation are covered by crowdAI.

The submission needs to have at least an L_1 score of 80% to be eligible for this prize.

There is also a monetary prize for the most highly ranked submission, which is determined as follows :

The challenge dataset contains 6 files, including:

frames.tar.gz : a tarball of a folder which has separate images for all frames, with the name convention “frame-id”.jpeg (Note: the frame-id is an integer)

The code must be runnable in one of these Docker containers:

If you wish to use another coding environment please contact us.